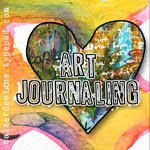 I came home from town today & the boys were excited again to share with me what they had learned today. (I'm loving this!) They googled today to LISTEN to the different sounds made by yesterday's owls. Come to find out the Screech Owl isn't really the one that makes the screeching noise they say they've heard out in the woods before, but it's actually The Barn Owl. Listen to it HERE.
************
Miss Alli has been on a smoothie kick here recently. And I love the fact that she doesn't hesitate to hop on here & google a recipe or different fruit combinations. Last week she got two Kiwis from the store. And this week she decided she wanted to try a mango.

We have seen this little critter out here below our dining room window poking in & out of the grass & straw......where the rabbit hutch used to be......& I just assumed it was a little mouse. Clay said probably a field mouse. For whatever reason, this morning the boys started googling to see what it REALLY was. Michael thought maybe a shrew at first.....but he wasn't grey, he was brown. Didn't look quite like a mole....the paws were wrong. I'm not sure exactly HOW they happened upon it, but when I came back down from my shower, they were so excited to tell me that what we have out there is a vole!

You can read more about them HERE. They are actually sometimes referred to as field/meadow mice. So, I guess technically Clay was right. But hey.....the boys had fun with their research. From here we went on a search about owls......because Michael read that sometimes vole bones can be found in owl pellets. We googled to see what kinds of owls live in VA. And HERE is what we found.
﻿ 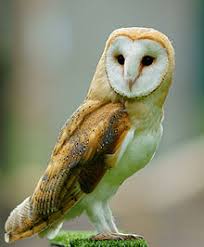 Was telling Maw this morning about a beautiful afghan that Aunt Linda gave me yesterday. The story behind it makes it extra-special. Seems she crocheted these granny squares when she was expecting her twins. Memaw put it together for her & did the border. But then she had a miscarriage & lost the twins. That was 36/38 years ago.....I can't remember exactly. But she had pulled it down from the shelf in her closet & asked if I wanted it. She said it wasn't doing her any good stuffed in her closet. What a special gift to receive......especially with the story that goes with it. This will certainly be loved & I'll be sure to pass the story down along with the afghan. 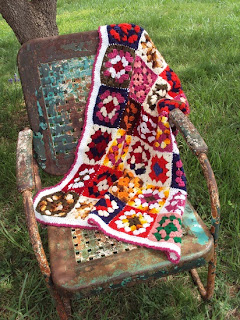 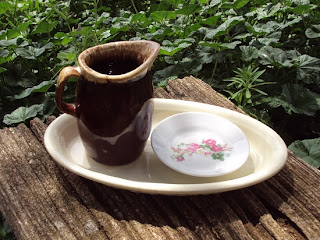 Three little Good Will finds that I picked up this past Friday. I love that little oval plate...very similar to the larger restaurant-type plate that Sarah gave me which I adore & use ALL the time. It's MY plate! And the little bitty dish....I picked up for a quarter. It sits on my kitchen table & that's what I put my vitamins/suppliments in each morning. And then the little pitcher.....I just fell in love with & besides it matches a larger one I have here that was Memaw's. This is sitting in my window sill now.....perfect for holding little spring blossoms. 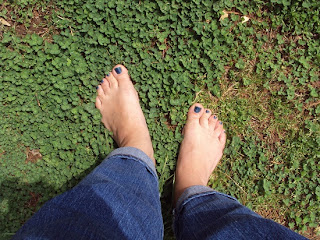 Barefoot weather, folks. After reading tons of articles....I'm bare-footing all the time. 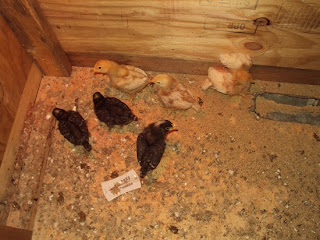 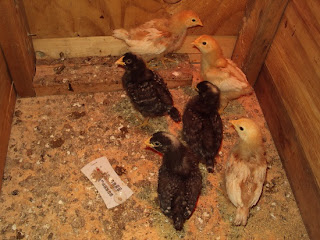 Before ya know it, they will graduate to the regular chicken house with the others.
Posted by Amy at 9:50 AM No comments:

Thought I'd do a quick run-down of some of the stuff we've been doing/learning around here the past few days.
**I started jotting things down last Monday (4/8).....Beautiful day....love the smell of freshly cut grass!! Everyone's outside doing stuff. Clay is mowing, Michael is hauling brush to the brush pile, I've been hanging clothes out on the line. The boys moved Jonsie (the rabbit) back to the North side of the house for the warmer months so he won't get too hot. Alli is laying on the quilt & I'm now going to finish my knitted dishcloth. Love just hanging out 'Doing Life' together as a family!
**Clay, Chris, Ashley, Jon & I recently got new cell phones. Samsung Galaxy. And alot of time has been spent playing with & learning about out new phones. And believe it or not, I'm learning how to text! **working on vehicles, the lawn mower, tiller, etc.
** Alli made a really cool ear ring holder. She found the idea on Pinterest & just got busy & did it! 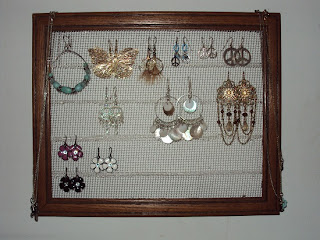 **We also got 6 new baby chicks. The boys built a big wooden box to keep them in the first little bit. They are in Clay's workshop. Michael is the main caretaker of the little ones.....keeping the heat lamp adjusted just right & keeping them fed & watered. The chickens/eggs have mainly been Jon's responsibility, but that will pass on to Michael when Jon goes to school this fall. 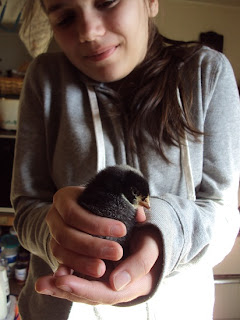 This little cutie is Patsy.
**Michael has been studying the driver's manual in preparation for getting his learner's permit. Also practicing turkey calls ALL the time. It's spring turkey season here & he & Jon have been going out each evening trying to see if they can roost a turkey.

**And then there's golf. This time of year Michael seems to have a golf club in his hand most of the time. He practices his putting on a fleece blanket in the dining room floor. Chipping in the front yard. And of course they watched every little bit of the Master's Tournament that they possibly could.

Plus any other golf show he can find. Clay, Jon & Michael have been to play twice already this spring at Poplar Grove in Amherst.

And Aunt Linda suggested to me yesterday that he might look into the possibility of a summer job at the Wintergreen golf courses once he turns 16. Nothing like working & making some money plus getting some free play time too.
**Jon spent this past weekend celebrating his 18th birthday while enjoying a fun-filled few days at Liberty University's College-For-A-Weekend (CFAW)

He got to attend convo & several classes with some of Ashley's friends. He went to the Tenth Avenue North concert. Enjoyed learing to ice skate, rock-climbing, paint ball, horseback riding & so much more. He's also been busy trying to find a summer job to make a little money before heading to school in the fall. He's already filled out his first application for Food Lion.
Posted by Amy at 7:14 AM No comments:

In Loving Memory of Darla Landers

What a whirlwind week. First hearing that our dear friend Darla was at Hospice House & down to mere hours on Monday evening. Getting up Tuesday morning & reading Mark's post that she had gone to glory about 12:30am...early that morning. I really felt like we needed to go to the funeral...for Mark's sake. But didn't know if Clay could swing the days off from work. Plus there was the fact that Thursday was Jon's 18th birthday AND we had to get him to Lynchburg for CFAW. Just didn't know how it would  all play out. But God's plans are amazing! I sat on the front porch Thursday morning reading my Bible & prayed....telling God how badly I wanted to go & if it was His will, He'd have to work it all out. Don't you know that within 30 mins. Clay called me from work (at 8am) saying he was getting off at noon & we would go to the Family night that evening from 6-8pm. And God, in His infinite wisdom had Chris off from work that day & he was more than happy to take Jon to get him checked in for CFAW. God really does work all things together for good! Noon, Clay is home, getting a shower & I'm getting dressed when he tells me I just MIGHT want to throw in a change of clothes...because we MIGHT decide to stay over for the funeral too. Told you it was a WHIRLWIND!! From 8am when he first called me to 2:30pm & we were out the door & 'On the Road Again'. It was an absolute GORGEOUS drive down there. God was smiling down for sure! We made it to the church right at 6pm. There were TONS of people there already. A testimony to the fact that Darla touched the lives of so many people. Now mind you, I had been crying for days reading Mark's updates, the morning he posted that heaven had a brand new angel in the choir, watching the video tribute they had put together for her...but Clay had been cool.....holding it together...until he saw Mark...after all these years...they both just hugged each other & lost it. It was that kind of  friendship....where no matter the time/years that go by....you can pick right up like you never missed a beat. After leaving there that evening, we drove back to Asheboro & rode around a bit reminiscing....then got something to eat & headed to our hotel. Friday morning we checked out at 11am & didn't have to be at the funeral til 3pm so we did some more sight-seeing/reminiscing. We drove out to the duplex where we lived right before we moved up here, the apartments where we lived when we first moved to Asheboro. Drove by Arrow International where Clay used to work, our old church...Eastside Baptist Church & went to the mall where we both had worked. I had NO idea just how emotional the whole trip would be. Not bad emotions.....but like a trip back in time. Her funeral was amazing....best funeral I have ever been to. They even brought the big projection screen down at the end & she talked & then sang 'God's Been So Good' as they escorted the casket & family from the church. Wow!! And if that wasn't emotional enough, at the graveside, Mark started singing 'Amazing Grace' & one by one others joined him. There are just NO words..........After that, we all went back to the fellowship hall for some true SOUTHERN Baptist fellowship. I tell ya.....the food was unbelievable. And I'm always amazed & touched at events like this with all the folks in the background that really make something like this so special. All those folks back in the kitchen that kept the food coming, drinks refilled, etc. And then at the end, cleaning evrything up. That's a true servant's heart! We stayed to the very end visitning with Mark, Jon & his wife & Miss Carol. Got home around 10:30pm Friday night. Tired, but oh so grateful we went. Being there for Mark & that 'Trip back in time' for Clay & I.....it was so good & so NOT something that we would've sat down & just planned on our own.....oh, let's go to Ashboro & spend the night & go riding around reminiscing but God planned it & it was amazing & I wouldn't trade those two days for anything in the world! 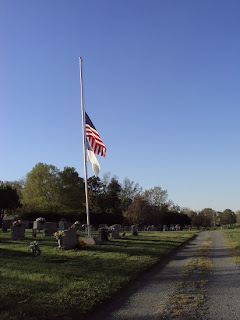 Our prayers are with Mark & his boys as they begin this new stage in their lives.﻿
Posted by Amy at 9:15 AM 1 comment:

I just finished up my very first art journal. I can't believe that I actually filled the whole thing. It's been so much fun & I can't wait to get started on the next one. 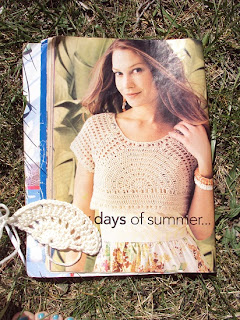 I've been doing a bit of painting in my art journal this afternoon. I'll paint a little bit & while I wait for that to dry, I'll do something else. It's so nice outside in the warm sunshine this afternoon....so while I waited for some paint to dry, I began working on my latest hooky project. This cute little top for Alli. It's my very first attempt at a garment, so I'm hoping it turns out alright. I'm whizzing right along at the moment. The pattern is very simple so far.
Posted by Amy at 1:15 PM No comments:

This one makes me smile!
Posted by Amy at 6:12 AM No comments: